You Would Not Believe Your Eyes 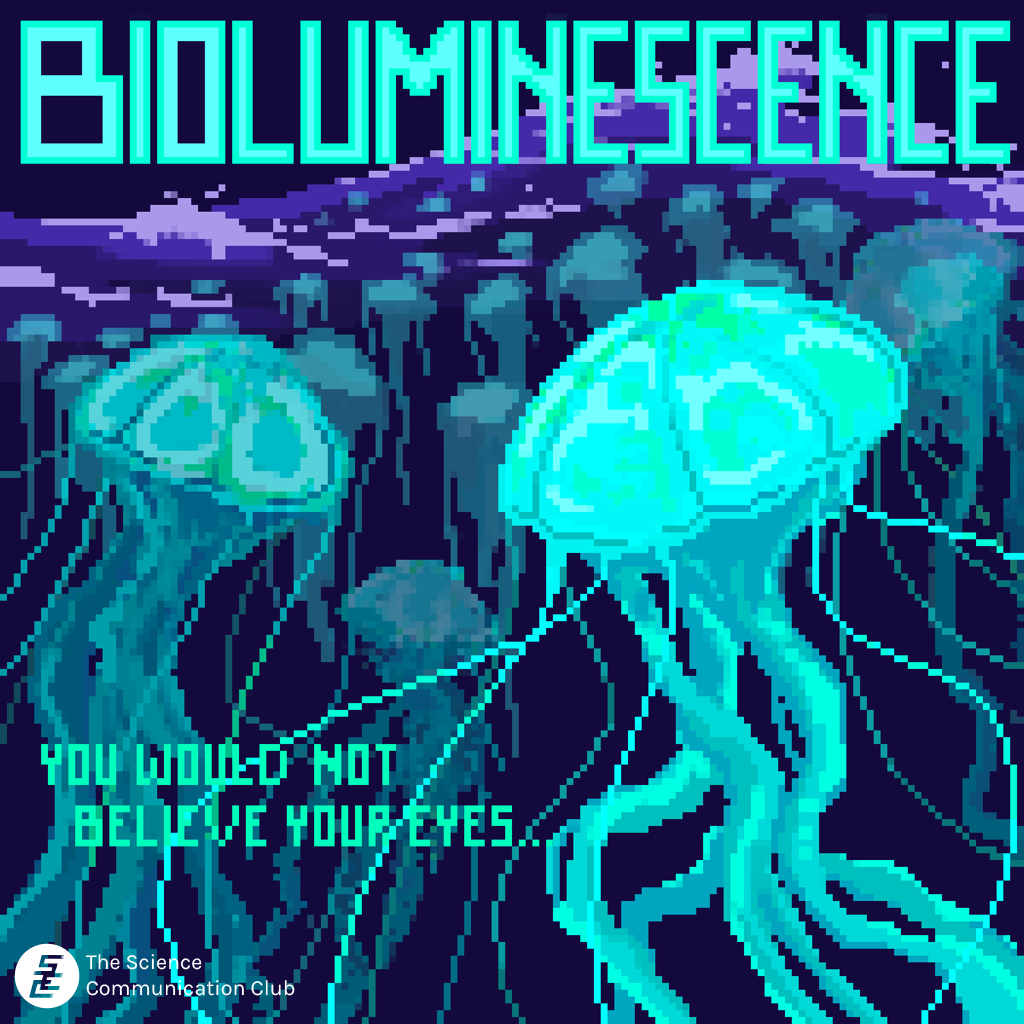 Deep in the ocean lies a dazzling display of light and colour that most humans will never get to witness firsthand. If you’re feeling a little bummed about not getting a ticket to the show, don’t worry. On land, a similar display might be happening in a forest near you, and if you’re lucky, even in your backyard! Take a seat in a park at the end of a hot, lazy summer day, and you might just catch a glimpse—of fireflies! They are one of many species of organisms that use something called bioluminescence to produce light.

Bioluminescence is light produced by a living organism, and it’s created through certain chemical reactions. In each organism, a combination of two chemicals is required: luciferin and either luciferase or photoprotein.1 Luciferin acts as the substrate, or the substance that is being acted upon. Luciferases or photoproteins act as enzymes, meaning that they interact with luciferin in order to speed up the reaction. In the case of bioluminescence, luciferin reacts with oxygen to produce light energy in a process called oxidation.2,3 However, luciferin is not just one chemical—it’s actually a class of chemicals, with a lot of variability between them! You see, each organism that creates bioluminescence may have its own form of luciferin, and might also require other factors to get the reaction going.2 As an example, the luciferin used by fireflies is appropriately named firefly luciferin. This applies to the enzymes luciferase and photoproteins as well, so each bioluminescent species essentially uses its own combination of chemicals to produce light!

So what sort of colours can we expect to see in the light show? The colour of light produced depends on the specific chemicals involved in the oxidation reaction.1 Different organisms can also evolve to produce certain colours of light that give them specific advantages in their environment. For example, most bioluminescent organisms in marine environments produce blue-green colours, which are more easily visible in the deep ocean. Longer wavelengths of light can’t travel as far into deep water, so most marine organisms can’t even process yellow, red, or violet.1 Many deep-sea animals are red because it helps them avoid being seen by other organisms! But some animals such as the dragonfish have evolved to see red light and even produce it by bioluminescence. It lets them see red-coloured prey, which in turn can’t even see their red light.2

Most bioluminescent land organisms also produce blue-green light, but some glow yellow, like fireflies.1 A few organisms can even produce multiple colours! For example, the heads of railroad worms glow red while their bodies glow green, as different luciferases in the worms change the colour of the light produced.1 But if you’re thinking that these bioluminescent organisms are like naturally occurring lamps, you’d be wrong. Although some bioluminescent organisms continuously emit light, such as fungi on deadwood (called “foxfire”), most flash light for an average of less than ten seconds.1 In larger animals these flashes usually occur in particular spots,1 but smaller organisms such as bacteria, fungi, and millipedes3 can illuminate their entire bodies.

At this point you might be wondering what functions bioluminescence has; organisms use it to hunt prey, defend themselves, and attract mates. As previously mentioned, dragonfish hunt prey using their red light,2 and another famous example of bioluminescence being used in such a manner is the anglerfish attracting fish to its mouth using the glowing ball attached to its head.1 In terms of defence, vampire squid eject bioluminescent mucus to distract predators while they make an escape, and brittle stars (which are much like starfish) achieve a similar effect by detaching one of their glowing arms.1 Lastly, the fireflies you might see in the summer use bioluminescence to attract mates, with the flash patterns communicating what species they are and their interest in mating.1

Even though we humans aren’t bioluminescent, we’ve still found ways to take advantage of nature’s fabulous light displays. Roman naturalist Pliny the Elder wrote about rubbing the slime of a certain jellyfish onto a walking stick to make it glow.5 In the late 17th century, Indigenous peoples of Indonesia used bioluminescent fungi to see in the forest at night.5 And before the 19th century, coal miners used fireflies and dried fish skin containing bioluminescent bacteria as lamps.5 More recently, green fluorescent protein (GFP) was discovered: it’s a protein in the jellyfish Aequorea victoria that exhibits green fluorescence when exposed to light.6 It can also act as a valuable marker or reporter, meaning that it can be tagged onto genes of interest. As a result, scientists can use GFP’s fluorescence to visualize and study genes and proteins in living cells.

I’m sure that many of us have heard the lyrics, “You would not believe your eyes / If ten million fireflies / Lit up the world as I fell asleep,” by the musical artist Owl City. But the truth is sometimes stranger than fiction, and nature already has millions of bioluminescent organisms scattered across various ecosystems. And even if you don’t get to see the glimmering lights of mating fireflies live next summer, rest assured that there’s an entire weird and wonderful world out there with plenty of bioluminescent creatures to come across!