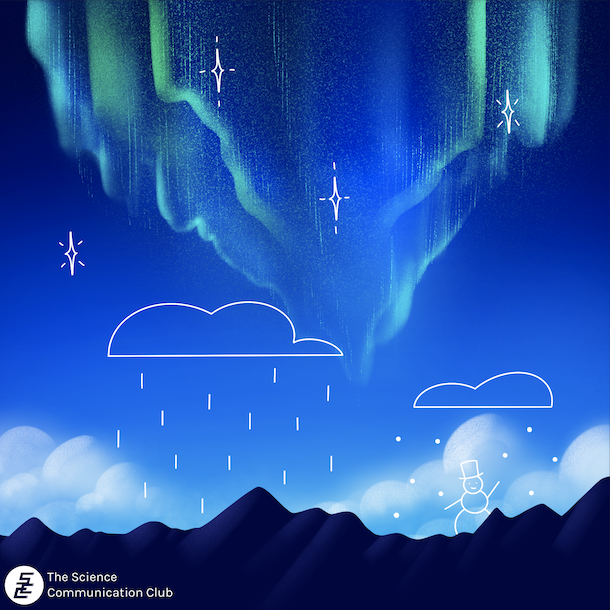 Just because you can’t see something, doesn’t mean that it doesn’t exist. Think of wind, gravity, electricity, and even the atmosphere. You may only know little, if anything, about the atmosphere, but we have a lot to thank it for. It’s an invisible blanket of air that surrounds Earth, protecting it and allowing for life to exist!
When we stand on the Earth’s surface, we breathe in air, which is made up of 78% nitrogen, 21% oxygen, 1% other gases, and a tiny bit of water vapour. This layer of air extends as far as 10,000 km away from Earth’s surface, and at its uppermost reach, it blends into the nothingness of space. Of course, there’s no air in space, so what exactly is keeping the atmosphere from drifting away? The same thing that keeps our feet planted firmly on the ground: gravity!
At this point, you might be wondering how Earth’s atmosphere came to be—do other planets have atmospheres, or did Earth just luck out? Scientists determined that when the atmosphere first formed from volcanic gas emissions, it had a very different composition than the one it has today. There was a lot more carbon dioxide and a lot less oxygen, but over time, oxygen was produced by plants during photosynthesis. Additionally, carbon dioxide was locked up in sedimentary rocks and fossil fuels, absorbed into the ocean and by plants. When it comes to other planets, many of them—including Saturn, Jupiter, Venus, and Mars—have atmospheres that are similar to what Earth’s atmosphere was like when it first formed!
Carbon dioxide allows plants to survive using photosynthesis, and many other organisms use oxygen to survive using respiration. Without the atmosphere, Earth would be as dry and lifeless as the moon! So the atmosphere is clearly necessary for life to exist, but what else does it do?
When you think of the sky, you probably think of clouds, or of lightning and rain. Weather and the water cycle are only made possible by Earth’s atmosphere and its different layers. The temperature and pressure differences between these layers allow evaporated water vapour to rise and condense into clouds before falling to the ground as rain or snow.
In the winter, when parts of the Earth are tilted further away from the sun and the temperature drops, atmospheric temperatures drop as well. When they reach below freezing and there’s some moisture in the air, tiny ice crystals in clouds stick together, forming snowflakes! In general, those snowflakes can make it to the ground if the ground temperature is also at or below freezing, and it turns out that slight temperature changes are what cause the differences between “packing” and powdery snow! If the snowflakes fall through air that’s slightly warmer than freezing, their edges will melt and stick together to form “packing snow”. If the snowflakes fall through colder air, they don’t melt and instead form powdery snow that doesn’t stick together.
Of course, snow and other forms of precipitation aren’t the only weather phenomena that rely on the atmosphere. In fact, weather is defined as the state of the atmosphere, so pretty much any weather occurrence that you can think of—including wacky ones like waterspouts or ball lightning—are due to the properties of the air in the atmosphere. The air’s temperature, pressure, and humidity all affect daily forecasts all around the world!
And let’s not forget the most important role of the atmosphere: as lovely as the sun is, without the atmosphere, it would kill all life on Earth! Within the atmosphere we can find ozone, a molecule made of three oxygen atoms. Atmospheric ozone absorbs high-energy ultraviolet (UV) radiation coming from the sun, which would otherwise cook us. And that’s not all; the northern and southern lights, also known as aurora borealis and aurora australis, are also caused by the atmosphere blocking radiation from the sun!
These auroras typically appear as bright, colourful streams of light that can be seen dancing across the sky when it’s dark. They occur at the two magnetic poles of the Earth, located at the tips of the northern and southern hemispheres. So what exactly causes these dazzling displays of light? It turns out that the sun will occasionally release charged particles into space, and when these particles collide with gas molecules in our atmosphere, they produce colourful light. Depending on which gases are involved in the collision and the altitude at which it occurs, different colours are produced: low-altitude oxygen molecules create the yellow-green colour most commonly seen, while high-altitude oxygen molecules create red light and nitrogen molecules create blue or purple-red light. So if you ever get the chance to see the northern lights, you can rest assured that they’re proof that our atmosphere is protecting us!
Whether it’s by providing oxygen, supporting the water cycle, or shielding us from the sun, the atmosphere has been protecting Earth for a very long time. The only thing that’s changed is that humans are now around to appreciate it! So the next time that you build a snowman or fly a kite, remember that it’s only possible because of our atmosphere, the cozy blanket of air surrounding Earth.