Rockin' Around the Space Debris 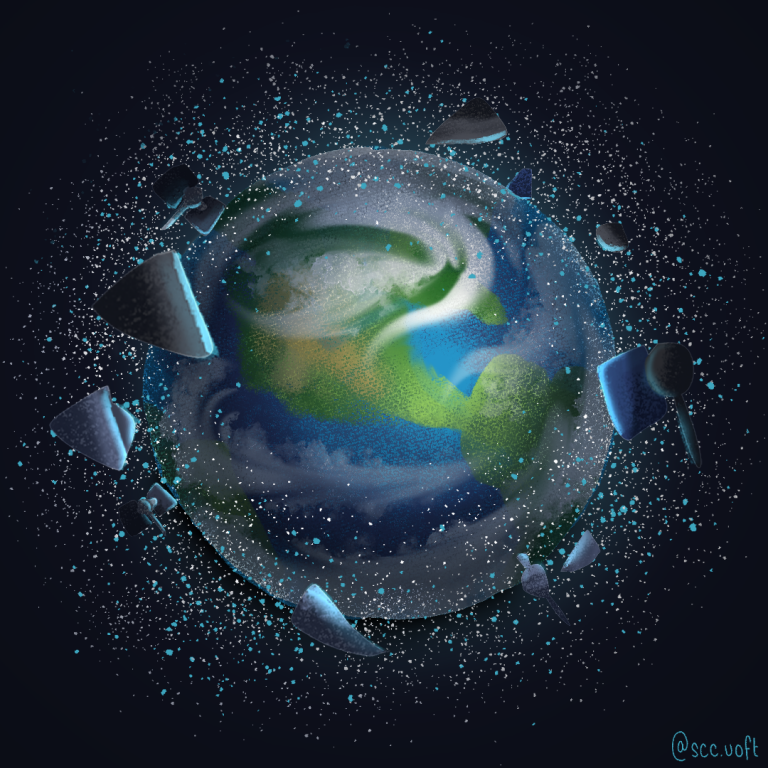 Humans have always looked to the stars for guidance and a sense of belonging, whether it was for celebrations and harvests or for physics and math. But if wanting to feel a part of something is a uniquely human trait, so is the ability to trash every place we’ve ever set foot on. From the moment humans first started launching objects into space in 1957, the issue of space trash—or space debris as it is formally called—came into existence. The term refers to any defunct man-made objects left in space that no longer serve a purpose, most of which remain in orbit around Earth. Since it takes a lot of energy and resources to bring things and people into and out of orbit, a good amount of equipment is left there once it fails or gets too old.
So what objects exactly are considered to be space debris? Mostly satellites, along with parts of spacecrafts, rockets, and fragments left over from explosions. Although you might think that only the big pieces of junk could be dangerous, it turns out that even the tiniest fragment can pose a threat while in orbit—they can reach speeds of up to 29,000 km/h, which is seven times faster than a bullet! At these speeds, collisions cause a lot of damage to important equipment and might put people’s lives at risk, which is why hundreds of collision avoidance maneuvers are performed every year, even at the International Space Station. Another reason why space debris is dangerous is the sheer amount of it: it is estimated that there are around 128 million pieces of debris in orbit between 1 mm and 1 cm in length, almost 1 million between 1–10 cm in length, and 34,000 objects bigger than 10 cm! The combined mass of all of those objects is thought to weigh more than 8,800 tonnes!
The good news is that space debris orbiting at lower altitudes will slowly be pulled downwards by the drag of Earth’s atmosphere over the course of several years, eventually burning up before reaching the ground. However, at the altitudes most common for satellites, they’ll remain there for hundreds or thousands of years. So what are our options for cleaning up space debris?
If a satellite is still operable at the end of its life, it can be ordered to re-enter Earth’s atmosphere. The only problem is that a small percentage of satellites fail and can’t respond to commands, so as the number of satellites launched into space grows exponentially within the next decade, even a small percentage of failures translates into many of them being left in space. The United Nations recommends that all countries remove their satellites from orbit within 25 years after the end of their mission, but these are voluntary guidelines and there aren’t any strict penalties for not complying. In the end, it’s up to every space-faring country and company to decide if and when they remove their satellites from orbit, but if one thing is certain, it’s that there’s no shortage of ways they can do so. Satellites can be brought out of orbit using a harpoon, magnets, a huge net, or they can even be heated up with lasers to increase the atmospheric drag until they fall out of orbit.
At this point in time, the biggest question about space debris isn’t how to take it down but rather how to prevent even more of it from accumulating. Nine American companies, including SpaceX and Amazon, have been licensed by the U.S. Federal Communications Commission to launch satellite constellations. These are fleets of thousands of satellites that aim to provide high-speed internet everywhere on Earth once they’re launched, with SpaceX being the first to start launching the satellites for their “Starlink” fleet from 2018–2020. Currently, only 2,218 of about 5,500 satellites already in space are still functioning, and SpaceX’s plans alone would add anywhere between 11,943 and a whopping 42,000 satellites into orbit within this decade.
And believe it or not, SpaceX’s satellites have already encountered their first problems! Around 3% of their 250 kg desk-sized satellites may have already failed, which would leave us with about 1,260 failed satellites in orbit if their maximum proposed fleet is launched. On top of that, on September 2 of this year, the European Space Agency had to move one of their Earth observation satellites to avoid a collision after SpaceX refused to change the path of their satellite. Ultimately, if companies rush to launch satellites in order to compete for a telecommunications monopoly, they risk making critical mistakes, and space is the last place for mistakes.
Satellite constellations ironically also cause a lot of harm to the field of astronomy, as light pollution from them disrupts the images taken by extremely sensitive telescopes and other instruments. And with several hundred satellites already visible to the naked eye, the day might come when we start wondering how many of the “stars” we see at night are actually satellites. In the end, only time will tell how big the problem of space debris gets. But while it’s true that humans are good at trashing their environment, we’re also good at problem-solving—so there’s always hope for improvement!