We like to think that we’re aware of what we’re putting in our bodies, picking out organic, lactose- and allergen-free food. But what if I told you that we each unknowingly eat a credit card’s weight of plastic every week?

It sounds unbelievable–where would the plastic even come from, not to mention so much of it? It’s all possible due to microplastics: tiny pieces of plastic smaller than five millimeters long (about as big as a grain of rice!).1 Some have broken down from larger pieces of plastic, while others are manufactured that small. A common example would be microbeads, which used to be found in toothpaste and some cosmetic products.1 In 2019, Australian researchers commissioned by the World Wildlife Fund (WWF) combined data from 52 studies, which were mostly about microplastic consumption from food and water.2 Their results showed a global average ingestion rate of over 2,000 tiny pieces of plastic, weighing 5 grams, every week.3 This amounts to about as much plastic as is in a credit card!

The biggest contributor of microplastic was drinking water, with shellfish, beer, and salt also contributing.2 Plastic was found in groundwater, surface water, tap water, and bottled water all over the world.2 A separate study done at the University of Victoria in British Columbia even found that people who drink only bottled water might be ingesting an additional 90,000 microplastics annually, compared to 4,000 microplastics for those who drink only tap water.4 Shellfish are also key contributors of microplastics because they’re eaten whole, and plastics build up in their digestive tracts from living in plastic-polluted waters.2 So how are microplastics getting into the water supply, and how can they harm us once they’re inside our bodies? 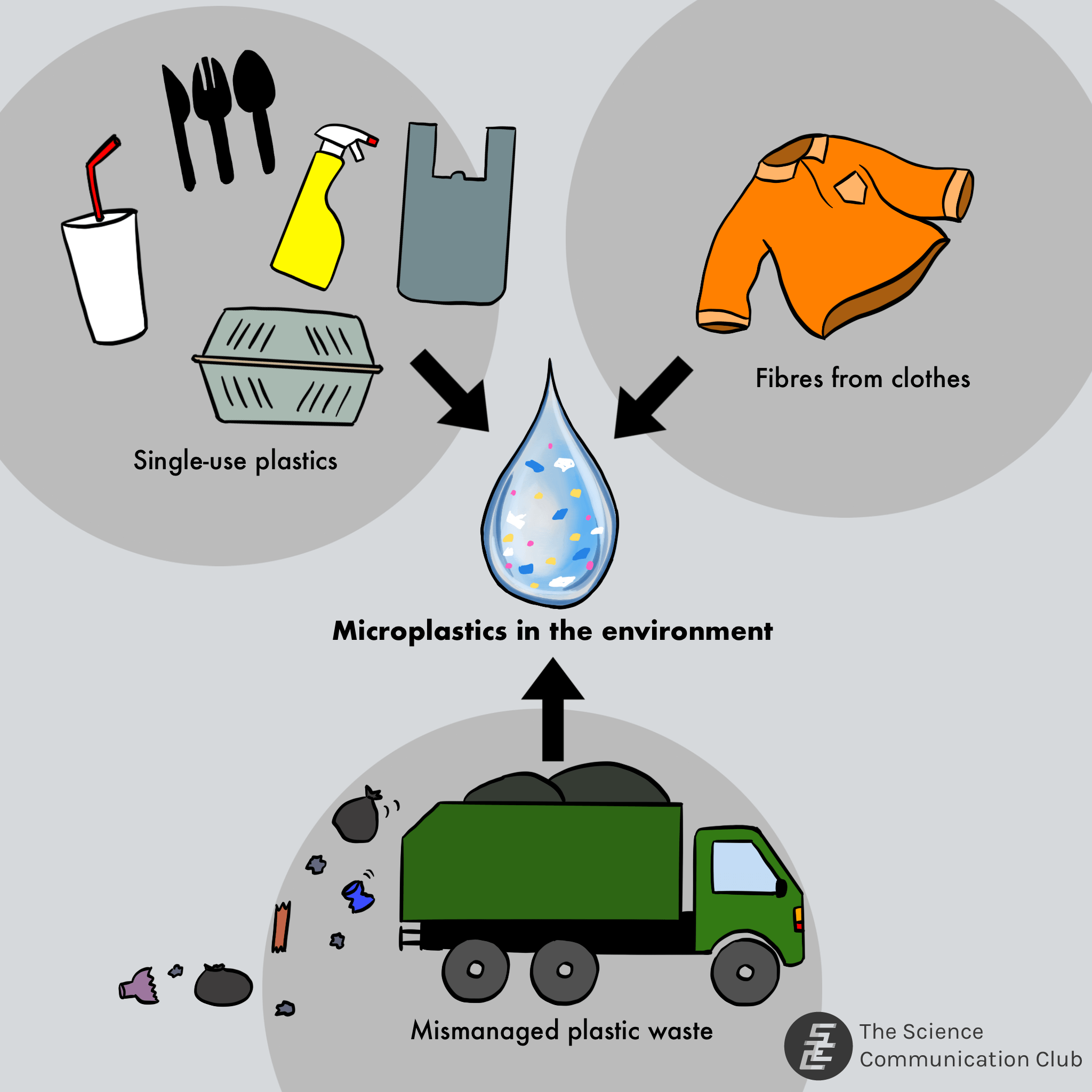 Microplastics are released into the environment in several ways. The most common type of microplastic is fibres, which get washed out from your clothes into the ocean.5 Microplastics can also flake off of single-use plastics,5 which are often improperly disposed of. About a third of plastic waste ends up in the environment, amounting to 100 million metric tons in 2016.2 Underdeveloped waste management infrastructure results in mismanaged plastic waste:  plastic that’s left uncollected, dumped, littered, or placed in uncontrolled landfills.2 87% of that mismanaged waste then leaks into the environment to become plastic pollution.2

Plastic pollution has been found in some of the furthest reaches of the world, illustrating its pervasiveness. It’s been located at the bottom of the Mariana trench and in Arctic sea ice,2 and even in some of the tallest mountains in the world, France’s Pyrenees mountains. In a 2019 study, researchers set up collectors 2,877 metres above sea level to trap plastic particles in the air over the course of five months.6 They collected an average of 365 plastic particles per day, including clothing fibres, pieces of plastic bags, plastic film, and packaging material.6 The study results also indicated that the microplastics were likely transported through the atmosphere over a distance of up to 95 km!7

The ubiquitous presence of plastic in the environment and in our bodies can harm us in two main ways: by leaching harmful chemicals such as BPA (which was removed from baby bottles after being linked to brain and developmental issues), or by physically causing blockages and suffocation.5 In addition, some plastics can carry production process residues, additives, dyes, and pigments that impact sexual function and fertility, and increase the risk of genetic mutations and cancer.2 That being said, the long-term effects of plastic ingestion in humans aren’t well-studied, so much research still needs to be done.

At this point it’s clear that plastic is here to stay in our environment, at least for the foreseeable future. Even the most efficient cleanup techniques won’t keep our waters plastic-free unless we also slow down or eliminate the fast-paced production of plastic. Turtles choking on straws were the poster child for reducing plastic straws, but if we keep producing plastic waste, we humans might soon be choking on all of the plastic ourselves.