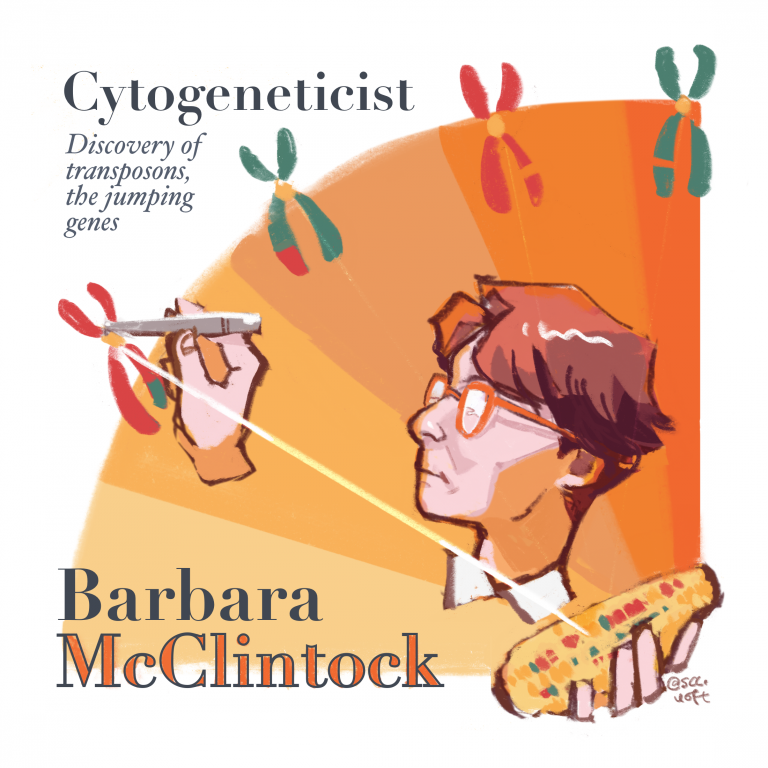 Meet Barbara McClintock, a Nobel Prize-winning scientist who revolutionized the field of modern genetics. Although McClintock is unfortunately not as well-known as other scientists, her contributions to genetics are immeasurable. Throughout her career, McClintock is credited with making ground-breaking discoveries in cytogenetics – the structure and function of chromosomes – where she studied maize (corn). McClintock was also the first to discover transposition, which is when genes physically jump around in the genome. This discovery earned her the Nobel Prize. As if these breakthroughs weren’t enough, McClintock was also the first to correctly speculate that genetic hallmarks can be passed through generations without any physical changes to DNA (also known as epigenetics), before the structure of DNA was even published! At the time, McClintock pioneered all three subjects but since, cytogenetics, transposition and epigenetics have become their own independent fields of study! All of McClintock’s research has been integral for the understanding of inheritance, which has laid the groundwork for genetic research across all disciplines.

McClintock was born in 1902 and raised in a modest household. She was independent from a young age and did not encompass the ideal ‘feminine’ traits of the time. Instead, she was interested in science and nature, and after a drawn-out feud with her parents who wanted her to settle down and marry, she was eventually allowed to attend Cornell University in 1919. By 1927, McClintock had earned a Bachelor’s degree, Master’s degree and PhD from Cornell! During her graduate studies, McClintock was interested in looking at the structure and function of chromosomes, with a particular focus on developing methods to visualize all the different chromosomes in maize. By studying the physical characteristics of chromosomes, McClintock was able figure out the inheritance of some traits in maize are linked to specific chromosomes.

By 1930, McClintock was working as a researcher at Cornell and was making breakthroughs in the understanding and visualization of meiosis, the process where reproductive cells divide their genetic material in half to produce sperm and egg cells. This process involves chromosomal crossing-over, where pieces of different chromosomes detach and switch places with each other. This allows genes to recombine, resulting in genetic variation. The theory of recombination had never actually been visualized, so this discovery earned McClintock multiple awards and fellowships. McClintock also briefly conducted research at the University of Missouri and the California Institute of Technology but faced discrimination because of her gender. She was passed up for promotions and was not credited for her work, which ultimately led her to transfer to a position at Cold Spring Harbor Laboratory in New York where she spent the rest of her career.

In the 1940s, McClintock conducted experiments on how variations in maize kernel colour were inherited. Eventually she was able to pinpoint the reason for the variation in kernel colour: non-stationary genetic elements in the genome. Using the techniques she established to visualize chromosomes, McClintock discovered that large portions of genetic material could move around in the genome and cause other genes to turn on and off, a phenomenon known as transposition. After observing these moving genetic elements (also known as transposable elements, or TEs), McClintock suggested they could be responsible for mutations in physical traits.

Unfortunately, her colleagues could not wrap their heads around McClintock’s research – they saw it as too radical and as a result, it was largely ignored. Disillusioned by this dismissal, McClintock decided to stop publishing her work and continued her research in isolation. It wasn’t until decades later in the 1960’s and 70’s that her research was seen for its ingenuity, which led to multiple awards and appointments, including the MacArthur Foundation Grant, the National Medal of Science and the Nobel Prize. In 1983, more than thirty years after her discovery of transposable elements, McClintock was the first woman to win an unshared Nobel Prize in Physiology and Medicine.

Like many women in science, McClintock experienced sexism and discrimination which made her time as a researcher more difficult compared to her male counterparts. However, McClintock persevered and didn’t let negativity or doubt cloud her passion for genetics. She is revered as a pioneer in her field, and a valuable mentor in the community at Cold Spring Harbor. When she wasn’t in the lab, it’s been said that she could be found collecting black walnuts from the trees around campus and crushing them with her car to make walnut loaf.