The Beginner’s Guide to Evolving Consciousness

The Beginner's Guide to Evolving Consciousness 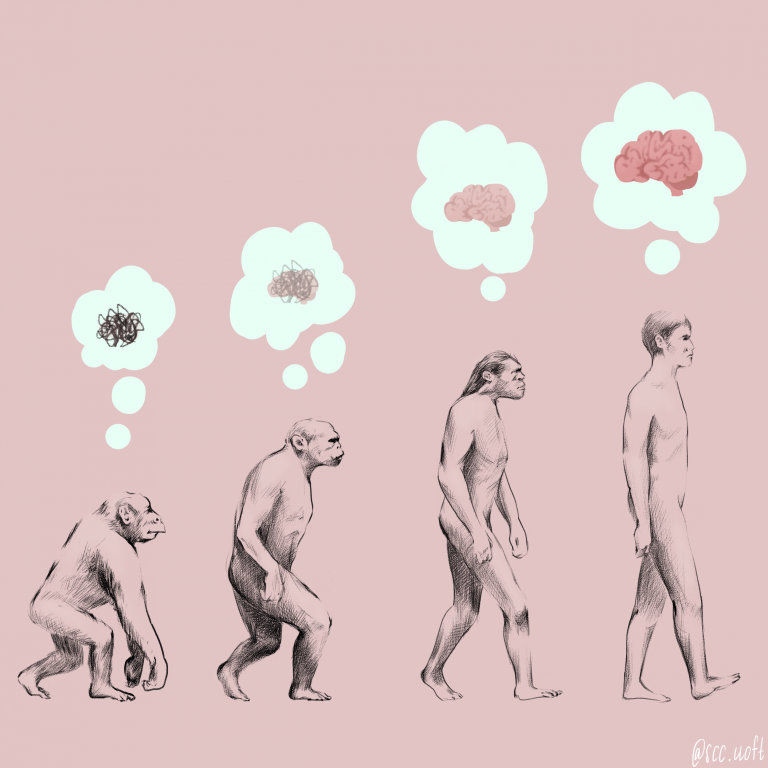 You’re probably familiar with this scenario: late one night you’re having trouble falling asleep, when you start to wonder where it all started. Does my dog think? What even IS thinking? What’s consciousness and how do we know what has it? We humans seem to have developed a higher level of consciousness that we haven’t found anywhere else in our universe. But what exactly caused our species to diverge so much from other organisms in this particular aspect? It’s a tough question to answer, especially considering that the definition of consciousness has never been agreed upon in all of human history, but for our purposes, we can consider consciousness to be an awareness of our environment and of our own inner state.

As with all other biological developments, consciousness likely evolved with a series of incredibly small steps that, over time, formed a sort of gradient of consciousness from simple to complex. The first existing form of basic consciousness was probably used by moving organisms to find food. After that, the evolution of vision would be the next major step, providing a way for an organism to perceive its environment from a distance. Following this, the organism would then undergo an internal change rather than a physical one: developing the ability to know where it is, find its way from one place to another, and store that information for future reference. Discoveries in 1971 by John O’Keefe and in 2005 by May-Britt and Edvard Moser—all later sharing the 2014 Nobel Prize in Medicine—illustrated the functions of the components making up the brain’s positioning system: ‘place cells’ which activate only when an organism is in a particular place, and ‘grid cells’ which allow the organism to perform complex navigation of its surroundings.

Memory and object permanence (the ability to understand that an object exists even when it’s not visible) develop alongside navigational abilities, together combining to create a basic sense of time. This is a big step on the way to complex consciousness because it allows organisms to remember the past and predict the future. A U of T campus favourite, the squirrel, demonstrates this ability by hiding nuts to dig them up later. A type of bird called the scrub jay is even more shrewd, and moves its food to another location if it realizes that another animal saw them hiding it; this shows that they’re aware that other animals are trying to eat their food.

The last, enormous step in the evolution of consciousness is generally accepted to be the development of complex language since it allows us to communicate very specific plans, ideas, and concepts about self-awareness that other organisms cannot do. The neurological and physiological evolution of language alone is a whole other puzzle in and of itself, proving to be extremely difficult to pin down and study.

All that being said, we’re pretty sure that our human level of consciousness is unique—but that doesn’t mean that we aren’t still learning about other organisms’ ways of thinking and what other forms of consciousness can look like. Maybe you’ve heard of Alex, the African grey parrot that could count and recognize colours and shapes; or perhaps of Koko, the gorilla who used sign language to communicate about her pain and show empathy. But animals have also shown different ways of thinking; for example, spiders use their webs as a form of extended cognition—meaning that they use it as an external tool to help them think, much how humans use calculators to count. New research has also shown that spiders actively tense and loosen different strings in their web to become more aware of information coming from a specific direction, since tenser strings are more sensitive to vibrations. Furthermore, when a spider loses its web, it starts making entirely different decisions!

Regardless of all of the forms that consciousness can come in and the many questions we still have about its evolution, we humans certainly are in a unique position to study the problem. After learning about the evolution of your abstract sense of self by reading words typed and shared on the internet using a laptop, you can enjoy the rest of your day with conveniences that other organisms can’t even begin to comprehend, and wonder at night about how this all came to be—all because of an incredibly complex process that took billions of years. This process is what allows you, at this very moment, to be aware of yourself.