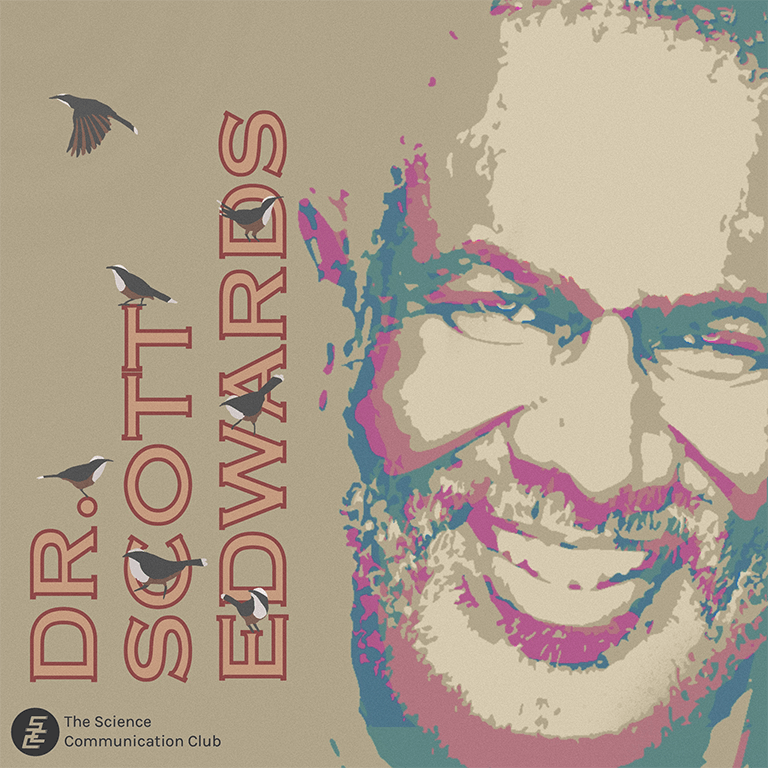 Scott V. Edwards’s colorful career and lifelong passion for birds began in his backyard in New York City, when his neighbor took him birdwatching for the first time. Unfortunately, his family pushed him towards medicine, a field that seemed like an obvious choice given that his father was a doctor. Dr. Edwards wasn’t exposed to biological research outside of the medical field until he decided to volunteer at the Smithsonian while pursuing his undergraduate degree at Harvard University. There, he learned more about the natural history of life on earth and decided to change his career path.

After completing his undergraduate degree in 1986, Scott returned to his birthplace, Honolulu, to conduct fieldwork. He was inspired by the diversity of wildlife he witnessed and applied to the University of California Berkely where he received his PhD in 1992. During his doctoral research, he narrowed his focus to birds, although he briefly conducted some research on frogs. He mainly studied babblers, a species of bird that lives in Australia, which he travelled to in order to spend time studying the genetic differences between species. Switching gears for a post doctoral fellowship, he began studying the major histocompatibility complex (MHC) of birds. The MHC is a group of genes that generates molecules that are present on the surfaces of cells. These molecules are very important for the immune system and the detection of foreign substances. Specifically, Dr. Edwards compared the MHCs of humans and songbirds, and was even able to track the spread of disease between birds using the properties of the MHC!

Since then, Dr. Edwards has been appointed a professor at Harvard University and the Curator of Ornithology at the Museum of Comparative Zoology. His research spans many different areas of avian science, including population genetics, systematics, phylogeography, comparative genomics, and behavioral evolution. He’s made significant advances in understanding the origin of feathers and flightlessness in birds, as well as the evolution of birds from dinosaurs. One prominent area of his research developed new ways to reconstruct the evolutionary history of birds to look at the relationships between extinct and living species. He served on National Geographic’s Committee for Research and Exploration and is a member of the American Academy of Arts and Sciences. He has sat on countless other boards during his time as a professor and edited for many scientific journals as well. He is an author on over 100 papers – an impressive feat for a scientist in any field!

Being an influential person of colour in the field of evolutionary biology, Dr. Edwards recognizes that there is a lack of diversity in this area of academia. One of his major goals is to inspire other young people of colour to explore their passion for the field just as he did. He is actively involved in raising awareness for the Black Lives Matter movement, and recently biked 3848 miles over 76 days in support of the cause. This aimed to raise money for diversity initiatives in organizations like the American Society of Naturalists.

Scott Edwards, Phd: Ornithologist. I Am A Scientist. (n.d.). Retrieved February 26, 2022, from https://www.iamascientist.info/scott-edwards