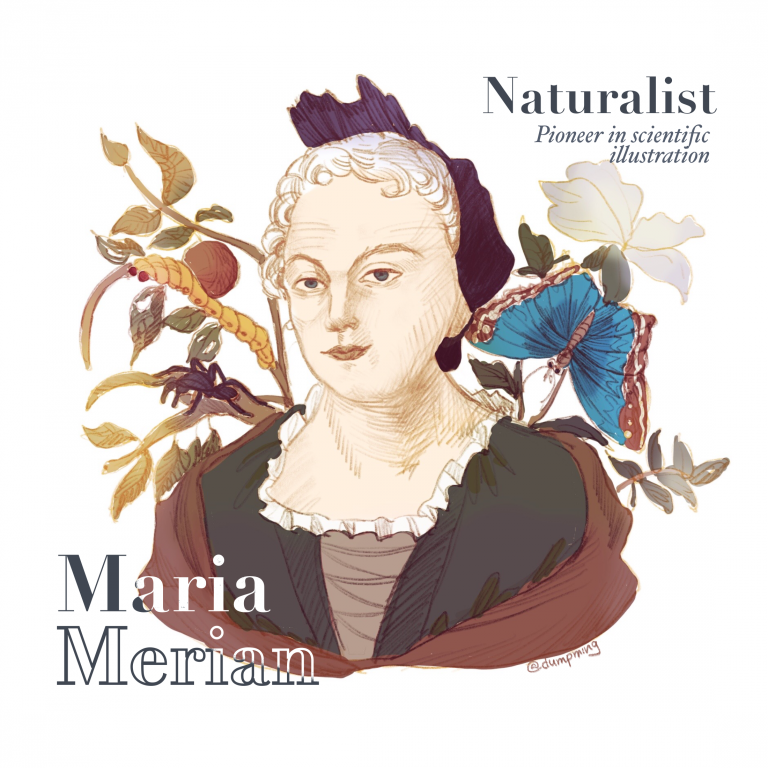 Maria Sibylla Merian is a long forgotten science illustrator, entomologist, and self-taught naturalist. She was born into a family of artists and her stepfather, a still life and flower painter, encouraged and taught her to paint at a young age. During her youth, she collected insects for his paintings, which inspired her to begin a collection of her own to paintand study from. This was not unusual as many women in Merian’s time would collect butterflies and incorporate insects in their floral paintings, but what set her apart was that she practiced scientific naturalism—a subject exclusive to men at that time—and would carefully illustrate insects in their different stages of life.

Merian is known for her books on insect metamorphosis. Her drawings show the interactions between insects and their environment, and were praised for being incredibly detailed and accurate; she would draw the animals and plants in their natural form and would even note their specific colours. Before the 1700s, it was uncommon for illustrations tobe coloured, and as we can tell now, Merian’s paintings would undoubtedly have a huge influence on the works of future naturalist illustrators.

Merian was also among the first few scientists to disprove spontaneous generation, atheory that living organisms suddenly sprouted from non-living matter. For instance, it was long believed that butterflies arose from mud, but after a thorough investigation, Merian collected enough evidence to refute the theory, which she demonstrated in her two volume series on insect metamorphosis.

At the age of fifty-two, Merian was granted permission by the city of Amsterdam to travel to Suriname, a city in South America. She funded the trip entirely on her own by sellingher paintings. She travelled there with her younger daughter, Dorothea Maria Graff, to study the plants and insects of Suriname and how they were used, which captured Merian’s interest. With the help of African slaves and indigenous people, the two spent two years in Suriname documenting the tropical insects and the native plants, using indigenous names toidentify local plants—these names are still being used today! Unfortunately, Merian fell ill andhad to return to Amsterdam. Upon returning, she sold engravings of the wildlife from Suriname and the specimens she collected on the trip; but most significantly, she published a book on the organisms she came across there that became very popular in Europe.

Darwin might have coined the phrase “the struggle for existence,” but it should be noted that Merian demonstrated this concept in her drawings at least a whole century before him. Carl Linnaeus, the Father of Taxonomy himself, used Merian’s illustrations to identify new species and he even used her name for the identification of animals, such as the ones found in Suriname. Merian’s expedition also inspired many women to follow in her footsteps to explore the world.

While Merian made a huge impact in the scientific community during her lifetime, sheremained virtually unknown after her death. It was later found that after she had passedaway, new insects were added to her engravings and the colours were altered to make themmore aesthetically pleasing. Furthermore, discrimination against Merian’s gender might haveplayed a role to her being forgotten as revealed by a critique of her works written by the naturalist, Lansdown Guilding, in the 1830s. Guilding had never been to Suriname and muchof the works criticized by him had been the ones that were altered. He was also skeptical of Merian because she obtained information from the African slaves and indigenous people, who he thought lowly of. Additionally, Merian was a self-taught naturalist so she was overlooked by academics in the 1800s.

Despite the misunderstandings and discriminations over the centuries since Merian’s death, she has been regaining recognition for her works in the past few decades. Merian has
made a huge contribution in the field of entomology, the study of insects, through her detailed documentation of insects and her precision and accuracy have shaped scientific illustrations. Ultimately, Maria Merian acts as an inspiration for future generations of women to overcome gender barriers.