The Most Influential Clock 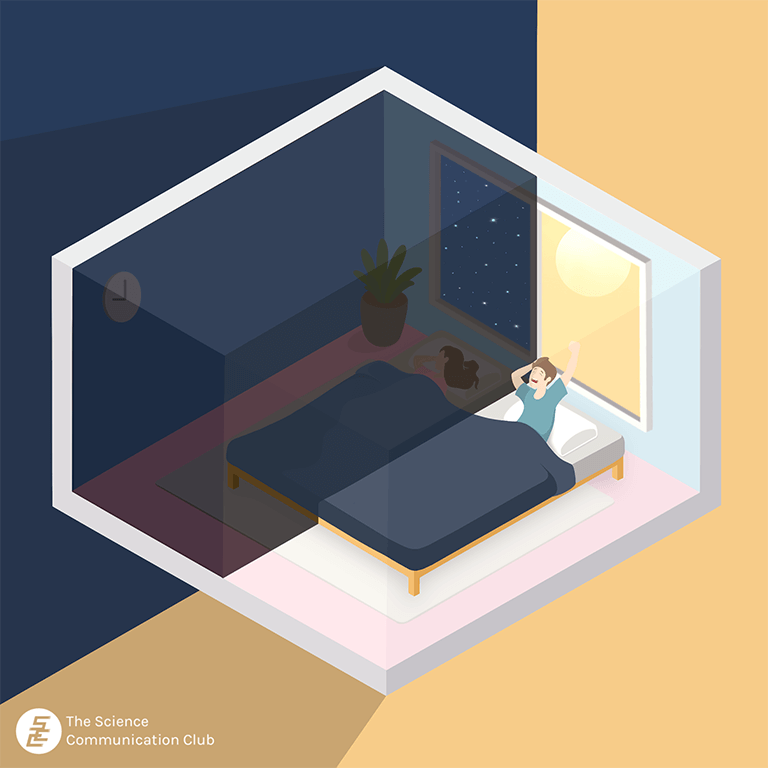 It’s on the wall, it’s on your wrist, it’s built into your laptop, but it’s also within you in the form of a circadian clock. Plants and animals developed this form of time-keeping to adapt their behaviors to the environment in a 24-hour fashion. This adaptation signifies the earth’s rotation and was originally observed by French botanist Jean-Jacques d’Ortous de Mairan in his basement cellar1. The circadian clock is also the dictator of our feeding-fasting cycle and activity-rest patterns. It explains why we get tired at night and feel energetic in the morning—well, at least for some people! The root of the circadian clock is in the suprachiasmatic nucleus (SCN), which is located above the optic chiasm in the brain. Like a good team leader, this nucleus networks with various parts of the body to ensure effective timekeeping.

What influences the circadian rhythm?

Although we each have a genetically-coded internal clock, there are still multiple external factors that can affect its regulation. For instance, eating is a form of resetting the circadian clock; aberrant eating patterns can disrupt the circadian rhythm of metabolism2. There is also the potential for an inactive lifestyle to interfere with the circadian clock. Mice studies showed that skeletal muscle activation improved circadian consolidation of sleep and activity3. Arguably the most significant influencer of the circadian rhythm is exposure to blue light2. The SCN receives direct input from the retina when light is present, initiating a cascade to promote wakefulness (i.e., metabolic, and hormonal processes). 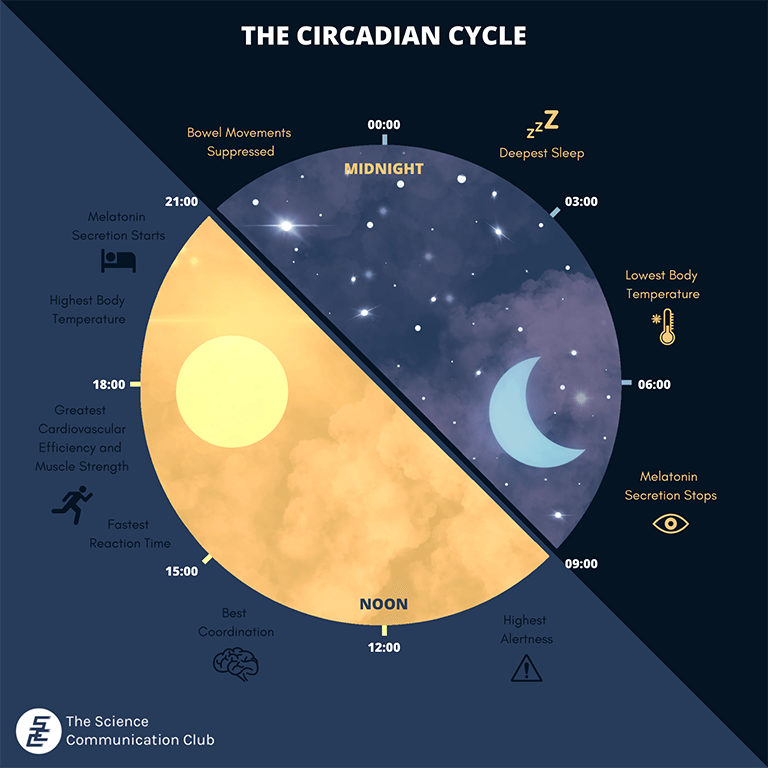 Where do we go from here?

The circadian clock was first observed to be implicated in diseases when a 1996 study showed a higher prevalence of breast cancer in long-term shift workers. This was explained by the light-at-night hypothesis which suggested that the hormone melatonin helps to neutralize reactive oxygen species (ROS). ROS are unstable molecules that contain oxygen and have the potential to destroy important elements in the body. Since melatonin is greatly produced at night (in the darkness) and inhibited in the daytime, there may be a higher chance of developing cancer when individuals are exposed to light at night3.  Additionally, circadian rhythm disruption worsens chronic psychiatric diseases, autoimmune diseases, and gastrointestinal diseases2.

With such widespread and powerful effects, the circadian clock could be an efficacious target for the treatment of particular diseases. For example, individuals with Parkinson’s disease have been shown to exhibit circadian dysfunction, which feeds in to worsen their capacity for movement. As a result, circadian therapies such as light stimulation, physical activity, and specific dietary schedules have been proposed as treatments to alleviate disease impact4. Furthermore, circadian rhythm therapy has also shown promising results in reducing depressive episodes in patients with bipolar disorder5. Although the mechanisms and efficacies of these therapies have not yet been elucidated, they appear to provide multiple benefits such as their non-invasive nature and tangible targets.

Recognizing the circadian clock’s fundamental role in our biology, its influences, and how it can be implicated in disease states is a good start to exploiting it for our benefit. Next time you consider pulling an all-nighter to study for your exam, think of your circadian clock and perhaps you will reevaluate your decision!