The Discovery of What May Be a "Star Burp"! 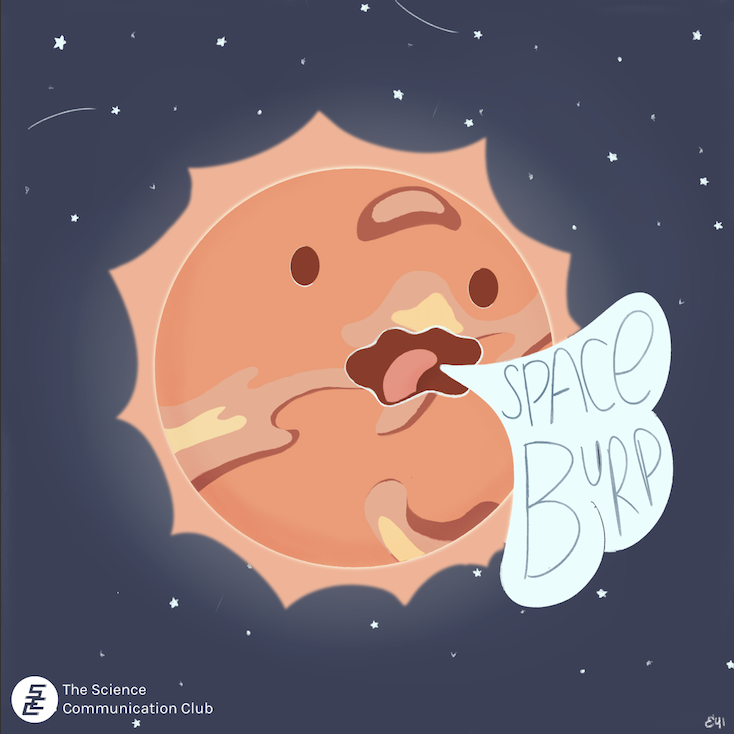 When we look up at the night sky, we see so many beautiful twinkling stars. We may be able to identify the North Star or constellations such as the Big and Little Dipper. One star in particular, Betelgeuse, is part of the Orion constellation and is actually one of the seven brightest stars we can see at night. First spotted in 1996, this star was found to be 20X bigger than the Sun! Not only is Betelgeuse much bigger than the Sun (which fits about 1.3 million earths inside of it), it is also about 14000X brighter!

Stars are generated from dust and gas — primarily hydrogen — that are brought together by gravity. As more and more of these components come together, it gets hot enough for two hydrogen molecules to fuse together to generate one helium molecule. This fusion reaction leads to the main life stage where a star can be stable for millions of years. Interestingly, while stars age as they get bigger in size, they actually lose mass as they burn through the gases in their core. Once a star has converted all its hydrogen into helium, it evolves into a red giant or supergiant, depending on their size. Typically, red giants eventually shrink once they no longer create fusion events and turn into a white dwarf. This is what is expected to happen to the Sun when it exhausts its hydrogen gas.

However, in the case of Betelgeuse, a red supergiant, these stars continue to fuse the helium gas in their core before fusing the resulting carbon. Then they start to produce heavier elements, such as iron, that absorb energy. This process leads to the collapse or explosion of the star in a bright supernova event. Betelgeuse burns through its fuel fast, so scientists suspect that it will reach the supernova stage in the near future. So, they were super shocked to see that it already dimmed way more than expected at the end of 2019. Although Betelgeuse tends to cycle between brighter and dimmer states, the level of dimming this time was nothing like what had been seen before!

At first, scientists expected that Betelgeuse was ready to enter the supernova stage and would be gone before the end of 2020. Surprisingly, after being at its dimmest in February 2020, the brightness started to return. This caused a few groups of scientists, led by Dr. Andrea Dupree, Dr. Emily Levesque and Dr. Phillip Massey, to dig further and monitor the surface for clues based on temperature and UV light increases, as well as dust movement. They hypothesized that a large portion of the star’s contents reached the surface and left all at once, almost like a “star burp”! They also hypothesized that this material cooled in front of the star, making the star appear dimmer until the material drifted away. This would mean Betelgeuse isn’t going away anytime soon!

However, other groups led by Dr. Thavisha Dharmawardena and Dr. Edward Guinan tried to follow up these findings with different observation techniques and failed to see evidence that backed up the claim of a star “burping up” dust.  This result suggests that either scientists are observing what may be the lead up to the supernova event of Betelgeuse, or maybe the star had a temporary and very rare, enormous dark spot. It could also have been the alignment of multiple cooling or dimming cycles, as scientists have seen brightness and dimming cycles on the star that last about 187, 400 and 2200 days in length.

Hopefully with further observations, scientists will determine whether stars can actually “burp” material that could contribute to the generation of life during various stages of their lifespan. Or perhaps scientists will be able to confirm whether these stars start to shed large amounts of this material right before a Supernova event.