Living in a Perpetual Present 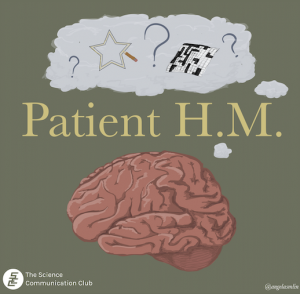 The phrase “live in the moment” is a favourite inspirational quote and good advice for most of us. But imagine a life that must be lived almost entirely in the present.
This is the reality for patients with a condition called anterograde amnesia, who are unable to form new memories. One of the most famous cases of this condition occurred in a man named Henry Molaison. According to Henry, living with the condition is as though “every day is alone in itself”.
For decades, he was mysteriously known as “Patient H.M.”, until his name was released following his death in 2008 and the world finally knew the name of the man who had contributed so much to our understanding of learning and memory.
After a bicycle accident left him with severe epilepsy when he was a young boy, Henry’s life was disrupted by frequent, brutal seizures, which eventually drove him to drop out of high school. Desperate, 27-year-old Henry and his family opted for a daring and risky surgery, where doctors removed the part of the brain causing the seizures. For Henry, this was a small thumb-sized region called the hippocampus. Unfortunately for him, scientists did not yet understand the true importance of the hippocampus in human memory.
The surgery did treat Henry’s epilepsy, but it also caused severe retrograde amnesia. Henry could no longer form new memories, nor could he remember much of the last few years before the surgery. To him, it was always as though he was still 16 years old. He described his life as feeling like he was constantly just waking up, unsure of where he was or what he had just been doing. He would meet new people, and promptly forget about them as soon as his attention turned elsewhere.
Henry’s case was no doubt a tragedy, but it also served as a learning opportunity. Thanks to Henry, scientists were able to clearly see that long-term memory and short-term memory are processed very differently in the brain. Specifically, we now know that the hippocampus is essential for forming long-term memories—at least, the kind that we can verbalise.
While it was clear that Henry had no obvious recollection of meeting the researchers he was working with, it seemed that deep down, he knew them on some level. Over the years of frequent interactions with Dr. Wilder Penfield and Dr. Brenda Milner, Henry seemed to gain some level of familiarity with the researchers, answering the door faster when they arrived, and seeming more at ease around them.
Arguably the most important observation of Henry was that, despite his severe memory impairments, he was able to learn new skills. Dr. Milner famously had Henry trace a star while looking only at its reflection in a mirror. The more he practiced this task, the better he could do it, until he was able to trace the star quickly and accurately, even if a lot of time had passed between practice sessions.
The fact that Henry could learn motor skills like this, despite not being able to form other long-term memories, showed that there must be different types of memories, each processed separately in the brain. The ability to perform motor tasks, such as tracing a star, playing the piano, or riding a bike, is called non-declarative, or procedural memory. You might know it better as “muscle” memory. Henry was able to form non-declarative memories, which indicates that the hippocampus is not necessary for this type of memory.
Non-declarative memories are a form of implicit memory, meaning they can form automatically without the need for conscious awareness. This also makes them hard to verbalise. Have you ever tried explaining to someone how you tie your shoes? Can you think about which hand you use first when tying them? It’s probably really challenging, because shoe-tying is an example of a non-declarative memory. The same goes for driving a car or playing tennis.
In addition to the insights he gifted researchers while he was alive, Henry agreed to have his brain be analysed after his death. It has now been digitally preserved for researchers to analyse for years to come. Before Henry Molaison, little was known about the mechanisms of human memory. Most researchers thought memory processes were distributed throughout the brain. His case was the first real evidence that declarative long-term memory was in fact localised to a specific, tiny region of the brain—the hippocampus.
Henry’s contributions to science have helped us make enormous strides in understanding human memory, furthering our knowledge of memory impairments and learning deficits. His story was also a clear demonstration of how central memory is to our normal, everyday functioning.