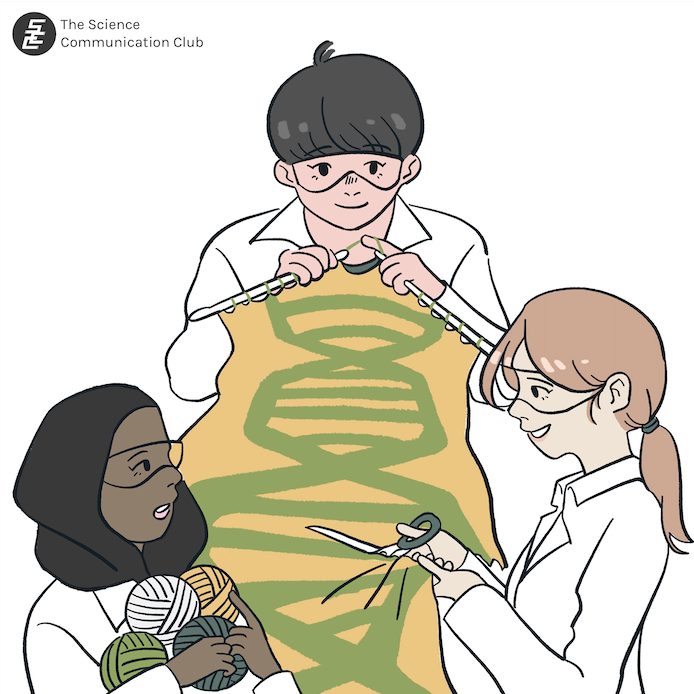 Last October, Emmanuelle Charpentier and Jennifer Doudna were awarded the Nobel Prize in Chemistry for their work in developing a gene-editing tool called CRISPR-Cas9. The discovery of the CRISPR-Cas9 system opened up a world of medical possibilities as scientists can use it to edit a gene precisely and thus revolutionized the field of biology!
CRISPR (which stands for clustered regularly interspaced short palindromic repeats) are fragments of DNA that were first found in bacterial cells and act as a defense mechanism against viral infection. The bacteria use CRISPRs to identify segments of viral DNA that have embedded themselves into their genome. Using an enzyme called Cas9, they cut the viral DNA out, thus stopping the virus from multiplying. The cell’s natural repair system fuses the cut ends of the DNA back together. Scientists can take advantage of this system by using it to ‘cut’ the DNA and supplying the cell with short DNA templates that they want edited into the gene; even though this editing system was discovered in bacteria, it has long since been developed as a tool to edit genes in all sorts of organisms!
CRISPR is relatively cheap to use and is a lot more effective than older gene editing methods. In recent years, scientists have been trying to use CRISPR to develop therapies for genetic conditions by editing the gene sequences causing these conditions. By 2020, these attempts seem to be bearing fruit: a group of doctors appear to have successfully treated a patient with sickle cell disease! This blood disorder is caused by a mutation in the gene coding for hemoglobin, a protein molecule that helps your red blood cells carry oxygen to the rest of your body. Sickle cell disease causes red blood cells to deform into a characteristic ‘sickle’ shape, which can clog up the blood vessels and damage the organs.
To treat this disease, doctors harvested stem cells from the bone marrow of Victoria Gray, the patient. The doctors were hoping to alleviate the symptoms associated with sickle cell disease by increasing the level of fetal hemoglobin in her stem cells. This protein is similar to adult hemoglobin—it carries oxygen from our mother’s blood to our own tissues when we’re still in the womb. However, fetal hemoglobin production stops once we are born as there is another gene that acts as a switch to ‘turn off’ the fetal hemoglobin gene. So, to compensate for Gray’s defective adult hemoglobin, her doctors hoped to raise her levels of fetal hemoglobin by ‘turning on’ the gene responsible for controlling its production. They used CRISPR to edit this ‘switch’ gene to the ‘on’ setting, thus increasing the production of fetal hemoglobin.
After the edits were made, Gray was given chemotherapy to prepare her bone marrow for the new stem cells. Then, she was infused with almost 2 billion of these edited cells, which would be responsible for dividing into healthy red blood cells. As of July 2020, the treatment seems to be working. Fetal hemoglobin levels in her blood had risen from 9.1% to 52.3% when tested 15 months after the treatment. The increased production of fetal hemoglobin seems to have treated Gray’s most debilitating symptoms, such as whole-body “pain attacks” or extreme fatigue. Of course, as the pioneer patient for this therapy, she will have to be monitored for a long period of time to see how the treatment fares in the next couple of years.
Gray was not the only one to receive this revolutionary treatment. The same group that administered this treatment also completed a therapeutic trial on a patient with β-thalassemia, a blood disorder that reduces the production of hemoglobin, rather than deforming it. After 5 months, the patient’s hemoglobin levels had risen considerably, and they were no longer reliant on the blood transfusions that were necessary to keep them alive. Since this initial trial, the treatment has been administered to eight more patients with either sickle cell disease or β-thalassemia, and data collected at the 3-month mark have been promising.
In March 2020, CRISPR was used to edit genes in vivo, meaning that the gene therapy was administered directly into the body. The clinical trials with Gray used CRISPR to edit genes in cells harvested out of her body, which were then infused back in. However, scientists at Oregon Health & Science University used CRISPR to delete a mutation in a gene responsible for Leber’s congenital amaurosis 10 (LCA10), a rare inherited eye disease, by injecting the components of the gene-editing tool directly into the patient’s eye. By correcting the mutation in vivo, the scientists hoped to restore vision in the patient’s eye by reactivating the photoreceptor cells (which are required to see light) that were affected by the disease. It’s too early in the trial to see if the therapy has worked, but the protocols developed in this experiment are expected to pave the way for developing therapies for other genetic disorders, such as Huntington’s disease, dementia, Cystic Fibrosis, etc.
CRISPR-Cas9 has revolutionized the field of gene therapy, and we will no doubt see the development of cures and therapies for diseases that we have never been able to cure before. Gene editing is only in its infancy, but this field is expected to grow exponentially in the next couple of years.