Cracking the Code of the Giant Squid 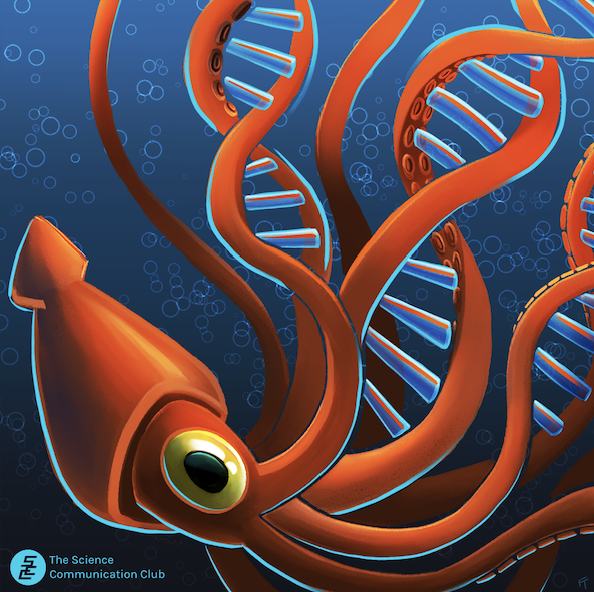 The giant squid is an incredible creature. As its name suggests, the animal is truly massive, reaching lengths of up to 59 feet and weighing in at well over 400 pounds. On its feeding tentacles, it has suction cups armed with sharp edges that help it snatch prey. And though its brain is small (enough to fit in the palm of your hand!), it’s known to be surprisingly complex.

Because of its fascinating characteristics, the squid has long been a topic of great interest for researchers. However, the creature has often managed to stay just out of their reach.

Although giant squids swim all over the world, they inhabit the great depths of the ocean—living in waters 1,650 to 3,300 feet below the surface. This makes them extremely hard to locate and study—much of what we know about them is from carcasses (often rotting and incomplete) that have washed up on shores. As a result, our knowledge of the squid is relatively limited, and many things about the creature remain a mystery.

One way to gain a better understanding of the giant squid would be to sequence its genome— the entire collection of DNA within the organism. DNA acts as a blueprint for the cell’s protein-making machinery, telling it exactly what kinds of protein to create. These various kinds of proteins in turn help to make up different parts of the body. In this way, a genome is like a guide for building a unique organism. And by studying this guide, we can find out how and why the giant squid got the amazing characteristics it did.

We only need a small animal sample to find out the squid’s genome, but doing even that has proved a challenge. This is because most samples are from squids long deceased, and are preserved in a solution called formalin. Unfortunately, formalin prevents DNA from being properly extracted from cells to study. Additionally, many old samples contain large amounts of compounds called polysaccharides, which also interfere with DNA extraction.

However, one study from the start of 2020 changed all that. In what researchers called “an incredible stroke of luck,” fishers in New Zealand came across the severed arm of a giant squid that had floated up nearby. They noticed that the tissue was still relatively fresh—a rare occurrence—and a sample was quickly sent off to the lab. At last, researchers were able to find out what the giant squid’s genome looked like.

Following this success, researchers performed preliminary studies on certain parts of the genome, already unlocking more information about the squid’s biology. In particular, they found that the squid contained a large number of genes for proteins called protocadherins. These proteins are known to be used for brain development and wiring, possibly explaining why the giant squid’s mind is so complex.

The squid’s DNA was also compared with other genomes to see if there were any characteristics shared between it and other organisms. It turns out that some of the protocadherin genes in the giant squid are also found in humans, suggesting there may be more links between us and the creature than we think.

Along with new discoveries, however, the genome of the giant squid has also revealed more mysteries—one of them being how the squid obtained its size. Previously, it had been theorized that the giant squid did so through a process called whole-genome duplication. This process is essentially what its name suggests: due to an error in how genes get passed down from parent to child, an organism can end up having two copies of all of its genes. If an organism goes through whole-genome duplication, the effects can carry on to its evolutionary descendants, causing them to be larger than they would otherwise have been.

By looking at an organism’s genes, we can find clues that its past ancestors went through whole-genome duplication. Upon inspection, though, the squid’s genome revealed that its ancestors did not undergo this process, meaning that it got to its enormous size through a different method. However, it’s believed that further study of the squid’s genome may allow us to find that other mechanism, solving the puzzle at last.

Although there is still much to be learned, the sequencing of the giant squid’s genome has certainly revealed some amazing things about it. And as we continue to study its genome, we may finally discover the reasons behind many of its other incredible characteristics. All in all, this scientific feat has brought us closer to understanding an amazing creature that was once to us mysterious. Who knows what fascinating new things will be unravelled next?