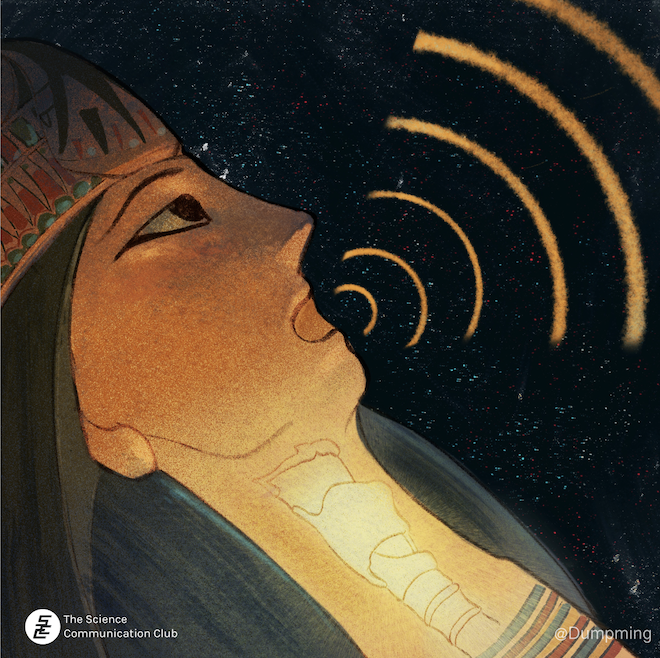 Have you ever wondered what it would be like to know what historical figures sounded like when they spoke? Thanks to advancements in science and technology, a group of researchers made that possible—by recreating the voice of an ancient Egyptian priest.

The priest, named Nesyamun, lived and served during the reign of Pharaoh Rameses XI in the 11th century BCE. How are we able to know his voice so far ahead in the future? The answer lay in his mummification process: for Nesyamun, it was particularly well done, leaving most of his vocal tract largely preserved and intact.

In humans, the vocal tract comprises the throat, oral cavity, and nasal cavity, and it’s the major factor in what makes someone’s voice their own. When your voice is created by the vocal cords, it comes out like a buzz—it’s only when it travels through the tract that it becomes a specific, recognizable sound, modified by the shape of the cavities. Changing the shape changes the sound; it’s why you move your mouth to pronounce different letters and why everyone’s distinct voice is unique to their own particularly structured vo

Researchers knew they’d be able to discover Nesyamun’s voice by recreating the passage of sound through his tract, which they did by harnessing the power of medical technology. They performed a CT scan on a portion of his mummified body, allowing them to visualize his vocal apparatus on an extremely detailed scale. Using the images from the scan as reference, they were able to create an accurately proportioned, 3D-printed replica of Nesyamun’s vocal tract. The replica was then connected to an electronic device that mimicked the buzzing sound caused by vocal folds. As that sound was transformed through his tract, Nesyamun’s 3,000-year-old voice was finally brought to the present.

You can listen to Nesyamun’s voice for yourself here. Because his vocal tract was fixed in one position, it’s just a single vowel sound: like a short e. However, researchers plan to go further with this in the future—they aim to use computer models to approximate other positions of Nesyamun’s vocal tract, allowing us to discover more sounds in his voice. From there, they plan to recreate words and even full sentences—and in time, we may be able to hear for ourselves some of the actual words he spoke as a priest!

All in all, there’s no doubt that this is a truly amazing discovery. Offering a fascinating glimpse into the past and integrating principles of anatomy and physiology, it provides valuable insight to the fields of the humanities and sciences alike. In more ways than one, this 2020 study is definitely a finding that’s made history.